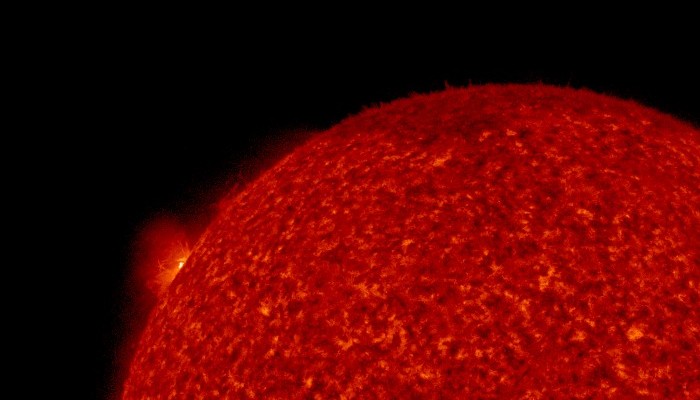 The area of the flare on 29 May 2020 (edge of the solar disk on the left). Image is taken by the AIA telescope located on the spacecraft SDO, 30.4 nm line.


The second, almost equal in strength to the previous one, large flare, was recorded on the Sun quite recently, less than 4 hours after the explosion of the last flare. The score of the new event, as measured by the GOES space observatory, took up to C9.3 points, although it classifies the new flare as class C (lower than the class of the previous flare M1.1), it still means that the power of the new event is inferior to the previous one by only about 10%. Two large flares in a row is an extremely unusual situation for such an early phase of the solar cycle when magnetic fields are just beginning to form, and their energy is too small even for a single event. Besides, as a rule, large explosion "devastates" the active region, and it takes at least a day to accumulate new energy. The two largest flares in three years in a row in one point of the Sun indicate that the active region is currently intensively energized, probably in the form of new magnetic fluxes emerging here from the depths of the Sun. It is impossible to confirm this straight away, since the flares occurred on the edge of the disk, where, due to projection affection, it is impossible to discern the processes occurring on the surface of the Sun at the moment. The STEREO (NASA) spacecrafts due to their distance from the Earth can see the Sun from different angles, but do not provide the necessary information at the moment as well.

Right now, the third outbreak is occurring on the Sun, the score of which is still unclear.

As already mentioned, the events which are taking place, although they raise many questions about the reasons for such abrupt start to the cycle, are not able to influence the Earth. Although due to the rotation of the Sun, the centre of activity is gradually moving towards the Earth, it will only be able to reach the coordinates from which plasma and particles can come to our planet only in a week time. To imagine that the Sun at such an early stage of the cycle has enough energy to maintain activity for another seven days is completely impossible. However, these events which are currently taking place on the Sun, someone could call them impossible, and, it is possible that this is not the only surprise that the new solar cycle, emerging in front of our eyes, will bring - the twenty-fifth in the modern history of mankind.