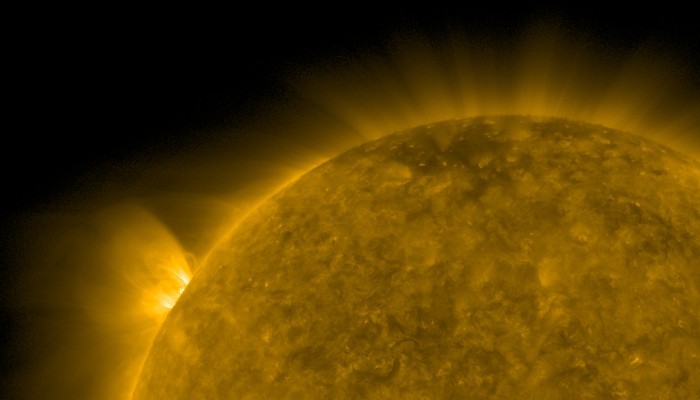 The area of the flare on 29 May 2020 (edge of the solar disk on the left). Image is taken by the AIA telescope located on the spacecraft SDO.


The first major solar flare on the Sun, which belongs to the class M (one located before the last highest mark of class X), has occurred several hours ago, at about 11 a.m. Moscow time, on 29 May 2020. Last time, a flare of a similar level was observed in September 2017 just before our star fell into a long almost three-years hibernation period. Since the source of energy for solar flares is the magnetic field, events of such power tell us more than any theories about the beginning of a new solar cycle which is based on the periodic cycles of destruction and formation of strong magnetic fields on the Sun, occurring in a period of 11 years.

Such a large event of unexpected character is explained by the absence of smaller solar flares (of a so-called class C) occurring on the Sun about 10 times more often and from where, usually, the spiralling of the solar cycle begins. In the first five months of 2020, not a single class C flare was recorded. Moreover, the class C flares are not recorded since May 2019 at all. Thus, the break in the flare-up activity of the Sun lasted almost exactly a year, and it has been interrupted today with the explosion of a high power right away. It still remains to find out whether this event means that the increase in a flare activity throughout the forthcoming cycle will be equally turbulent or if this is just an accident.

It is likely, that rapid growth is an outcome of a long break in solar activity that preceded the beginning of the current cycle which has lasted for almost three years. Like during the previous solar minimum that occurred in the middle of 2008, the break for level C solar flares lasted for 7 months (vs. the 12 months in this cycle), and the break for level M solar flares lasted less than 2 years (vs. the current one, for almost 3 years). The length stretches to one year at the beginning of the cycle could also contribute to the accumulation in a global field of the Sun of more energy which should accompany the more abrupt and impulsive start of the cycle. An alternative point of view is that our star during its last cycles has been moving from the era of high solar activity to a global century-long (or maybe even millennia-long) minimum. In this context, a deeper minimum is a forerunner of a weak maximum of activity, and the following cycles, in the 30s and 40s of the current century, will be even weaker, with concern in reaching the Maunder’s new minimum. In the light of this opinion, the sudden appearance of the current cycle with a large solar flare jumping over weaker classes is only an accident which is very common in science. To understand whether this is so will be possible only on the basis of new observations in the coming months.

With any scenario, one thing is certain. A new solar cycle has begun and will fully determine the physics of our star for the next 11 years. Thus, the heart of our star still beats in a rhythm that is established from observations of the Sun for over the past 400 years. If the pattern of these years repeats itself, then, the next three years the frequency and strength of solar flares will slowly grow to the maximum that will fall on a period of 2023 - 2024. After that, the Sun will stay on this (yet unknown) level for 2-3 years, and then the activity cycle will decline towards a new winter on the Sun, reaching its minimum in the early 2030s. However, agrees the Sun with such scenarios itself, only time will show.

In conclusion, it can be noted that in spite of the high score of the flare, the place of the explosion located at the very edge of the visible solar disk, where its influence on the Earth is excluded, completely. From the planets of the solar system, the strike of the Sun will be taken by the planet Mercury this time, which is now located almost exactly opposite of the flare area and now forced to become the first “victim” of the new solar cycle.